Trencadís mosaic, the hallmark of Gaudí

Trencadís mosaic, the hallmark of Gaudí

The most characteristic architects of the Catalan Modernisme movement. His work, highly personal and imaginative, drew inspiration from plants and animals found in nature and his interest in using organic shapes that Antoni Gaudí was a revolutionary in his time and soon became one of are curved instead of flat led him to create his own architectural language expressed through the innovative technique of trencadís mosaics, one of his most personal hallmarks.

Trencadís is a technique used to cover structures with a mosaic, normally abstract, of irregular pieces of ceramic, glass or marble tiles. The story goes that one day Gaudí visited the ceramics workshop of Lluís Bru and, when he saw how slowly he was putting the pieces in place, Gaudí got impatient, grabbed a tile, broke it and said: “We have to put them on by the handful, like this, or we’ll never finish!” Anecdotes aside, the fact is that Gaudí used bright, durable colours in his projects on curving surfaces that make them shine and added to their artistry. To do so, he used ceramics, but it had to adapt to the wide variety of surfaces he built. Trencadís mosaic was the solution that allowed him to use this material flexibly on any sort of construction, even rounded shapes.

This technique also made it possible to recycle and reuse materials. Because, in addition to promoting architecture that is respectful of nature, Antoni Gaudí was a pioneer in environmentally friendly construction. He used waste materials from factories willing to collaborate. For his trencadís mosaics, Gaudí chose happy, clear colours to bring light, dynamism and energy to his work, and combined different materials and techniques to get a variety of effects. In addition to ceramics, he also used glass, marble and stone. The materials he chose also acted as a shield for the buildings he designed, as they are resistant to weathering and the passage of time. 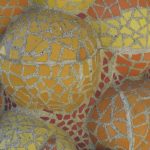 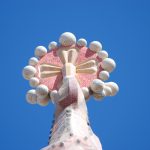 The trencadís technique was first used on the knocker at the entrance to the Güell estate and can be seen on the architect’s most emblematic works, such as Park Güell and Casa Batlló.

The Sagrada Família has several applications of this technique, both inside and outside the Basilica, although the mosaics that stand out most are those on the towers: in order to have the greatest visual and symbolic impact, all are topped with lanterns and pinnacles covered in mosaics of polychrome glass from the island of Murano, Venice, known also as Venetian glass.

The trencadís mosaics on the towers of the Nativity façade are from Gaudí’s time, while those on the towers of the Passion façade are from the 1970s. One of the professionals in charge of coordinating and executing this work by hand today is Joan Orriols, who has done part of the trencadís mosaics on the inner vaults and all of the ones on the apse and sacristy. In the following video, he explains how he applies this technique to the work currently under way, the offering pinnacles, and how this trade is carried out today using the technique Gaudí made popular a century ago.