Before plastic- and oil-based waterproofing products, such as bitumen and silicone sheets, the construction sector resolved these issues by giving roofs two key traits: first, a highly pronounced slope, even when the rooftop was accessible, so that rainwater would run off quickly without pooling; and, second, well-ventilated spaces under the roof: the attics. This strategy was very common in the roofs on old homes in Barcelona’s Eixample district, which were covered in several layers of ceramic tile and, therefore, permeable. With this system, when the roof got wet, if any water made its way through to the attic, it could dry or evaporate thanks to the ventilation from the small decorative holes in the upper part of the façade.
Gaudí also used this system in his other constructions: the attics at La Pedrera, Casa Batlló and Torre Bellesguard are well-known examples. And he did the same at the Sagrada Família. On the one hand, the largest face of the roof has a very steep pitch, only accessible to climbers. On the other, he designed a multi-layered stone roof, with several attics, one on top of the other. Over the central nave, there are three. These accessible attics became a great place for maintenance staff to install and monitor the power, lighting, heating and cooling installations in these spaces.

Gaudí predicted that light would also enter the Temple through the attics, perforating the vaults with a succession of hyperboloids. So, the double-funnel shape that is characteristic of these geometric elements gives the attics a series of features that look like open pots, which let the light into these spaces and then down into the Temple, through the vaults. 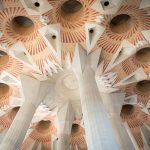 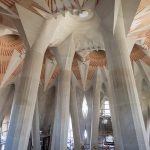 THE RESULT OF STUDYING LIGHT AND STRUCTURE

Of all the attics at the Temple, the most special one is above the crossing, on top of the central point of the Basilica where the main nave and the transept nave cross. In fact, this is where it gets its name: the Crossing room. It is located on top of the 60-metre tall vault and just below the tower of Jesus Christ, and is the widest hyperboloid at the Temple. The great pot shape can be seen in the circular stands that surround the central opening. From here, looking down, you can see the monogram of the Sagrada Família in the central shield on the floor of the crossing. These circular stands create a space reminiscent of the chapterhouse at a monastery, but Gaudí did not intend it to be a place for meetings. Nevertheless, it is a space of great value, unimaginable to visitors, and yet another example of Gaudí’s wealth of architectural inspiration. 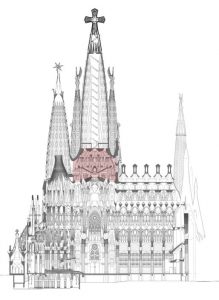 In this room, we can see how the central branch of each of the four columns that make up the 15 x 15 metres crossing reach towards the centre of the vault to hold up the central core of the tower of Jesus Christ, which begins just above it. We also see how the back branches on the same trees fork off here and create a perimeter of inclined columns joined at the top or bottom, alternately. This layout and inclination of the columns, which in pairs create triangles with the tip alternating up and down, is a very clever way of making the drum that provides the structural strength needed for the base of the tower, supporting the weight of the outer wall of this stretched dome that is the central lantern. 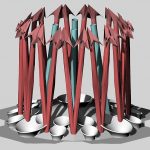 Drawing of the Crossing Room

The ceramic vaults are roughly 15 metres above the centre of the Crossing room. They are made of a crown of twelve openings or hyperboloids and decorated with Venetian glass trencadís mosaic in red hues, reminiscent of the red in the symbolism of the martyrdom of Jesus. Above the oculi, there is a technical space with installations servicing the room and the whole tower.

Right now, the Crossing room is still awaiting a few finishing touches, such as the disc-shaped lamps that will decorate the oculi; as well as the railings and entrances that will allow visitors to come in and discover the space, as so far only a few accredited journalists have been able to visit this space for press conferences. However, although it isn’t finished yet, we wanted to share this 360° photo so everyone can get a look at this gem, even if it is virtually, and discover another one of the Temple’s ‘hidden treasures’. 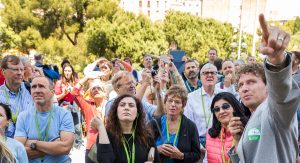 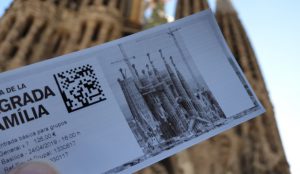 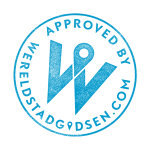 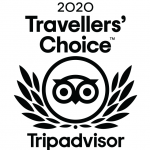